Each day began the same. I woke up and pulled the curtains open, looking across the Manhattan skyline from the 28th floor of the Marriott Marquis. Down on the street directly below my room, the lights at Junior’s Restaurant were already on, inviting me to step back in time. Just like the diners of the ’50s and ’60s, you don’t go to Junior’s only for the food. You go knowing you’ll get great music and a waitress who asks “What can I get you, honey?” while filling up your cup with strong black coffee. What I didn’t expect was that my morning ritual would so strongly resonate with the theme of the Association for the Advancement of International Education conference I was attending, one that called us to examine diversity and difference, and how our institutions and systems both encourage and inhibit these.

In his poignant essay “America Needs a Miracle,” writer Andrew Sullivan details two radically different takes on the state of American society, both of which agree on a fundamental point: the political and social crises we now face in the United States originated in the laws enacted in the 1960s, setting us on what was perhaps an inevitable trajectory. While the Civil Rights Act and Immigration & Nationality Act of 1965 have undoubtedly done great good, they also opened the floodgates. In the decades that followed, the shifts in population and protections for minorities expanded opportunities for many, creating far more diverse communities that often lacked the tools and understanding to easily adapt.

Globalism brought this to a head, amplifying differences not only in ethnicity, but also socioeconomic status. More importantly, it also replicated the tensions and conflicts we faced in other countries around the world. as cultures negatively reacted to unprecedented levels of migration and technological advances, and in turn diversity. In many cases the animosity is grounded in legitimate concerns: job losses, economic inequity and cultural misunderstandings. It’s not an issue of whether our systems were, and are, right or wrong. It’s about acknowledging that they’ve pitted us against one another, creating clans that ultimately define us: liberal and conservative, left and right, black and white, and countless other allegedly diametric opposites.

Sully captures this eloquently: “If humans simply cannot help their tribal instincts, then a truly multicultural democracy has a big challenge ahead of it. The emotions triggered are so primal, that conflict, rather than any form of common ground, can spiral into a grinding cold civil war. And you can’t legislate or educate this away.” Yet legislate and educate are precisely what each side has attempted, but with a blunt hammer swung with insults and blame. Through it all we forget that our issue is no longer solely a lack of diversity. It’s the failure to recognize that we all have differences, and that those differences will always exist. We should be seeking to understand these, not using our voices and positions to dominate in a vain attempt to create a utopian workplace.

The opening un-keynote of the conference, delivered by Berkeley professor Dacher Keltner, clearly highlighted our shifting understanding of power wielded in this manner. As opposed to the traditional Machiavellian conception based in fear, coercion and force, Keltner argues that we are increasingly understanding how empathy, courage and generosity allow us to more effectively influence others and instigate change. Far from simply being a theory, this stance is grounded in research. From children in a classroom to billionaires on Wall Street, numerous behavioral studies consistently point to the universal way in which those we are most willing to respect and follow draw upon this common set of tools and, crucially, use gratitude and humility to ground themselves as their power grows.

You don’t need to have a title, certificate or public recognition to influence others in this way and bridge differences, a fact reinforced on the final day as Firoozeh Dumas stepped onto the stage. A native of Iran who grew up in the United States just as her country entered the public consciousness through the hostage crisis in 1979, she experienced firsthand the animosity that can arise from national and racial differences.

During our stay in Newport Beach, the Iranian Revolution took place and a group of Americans were taken hostage in the American embassy in Tehran. Overnight, Iranians living in America became, to say the least, very unpopular. For some reason, many Americans began to think that all Iranians, despite outward appearances to the contrary, could at any given moment get angry and take prisoners.

Many of us are fortunate enough to never endure the stares, the questions and the sneers that others grapple with on a daily basis. I suspect for some the reaction would be to lash out in anger, in frustration over being seen as different. Dumas has never held a position of authority, yet through sharing her experiences with humor and grace, she accomplishes far more than most. 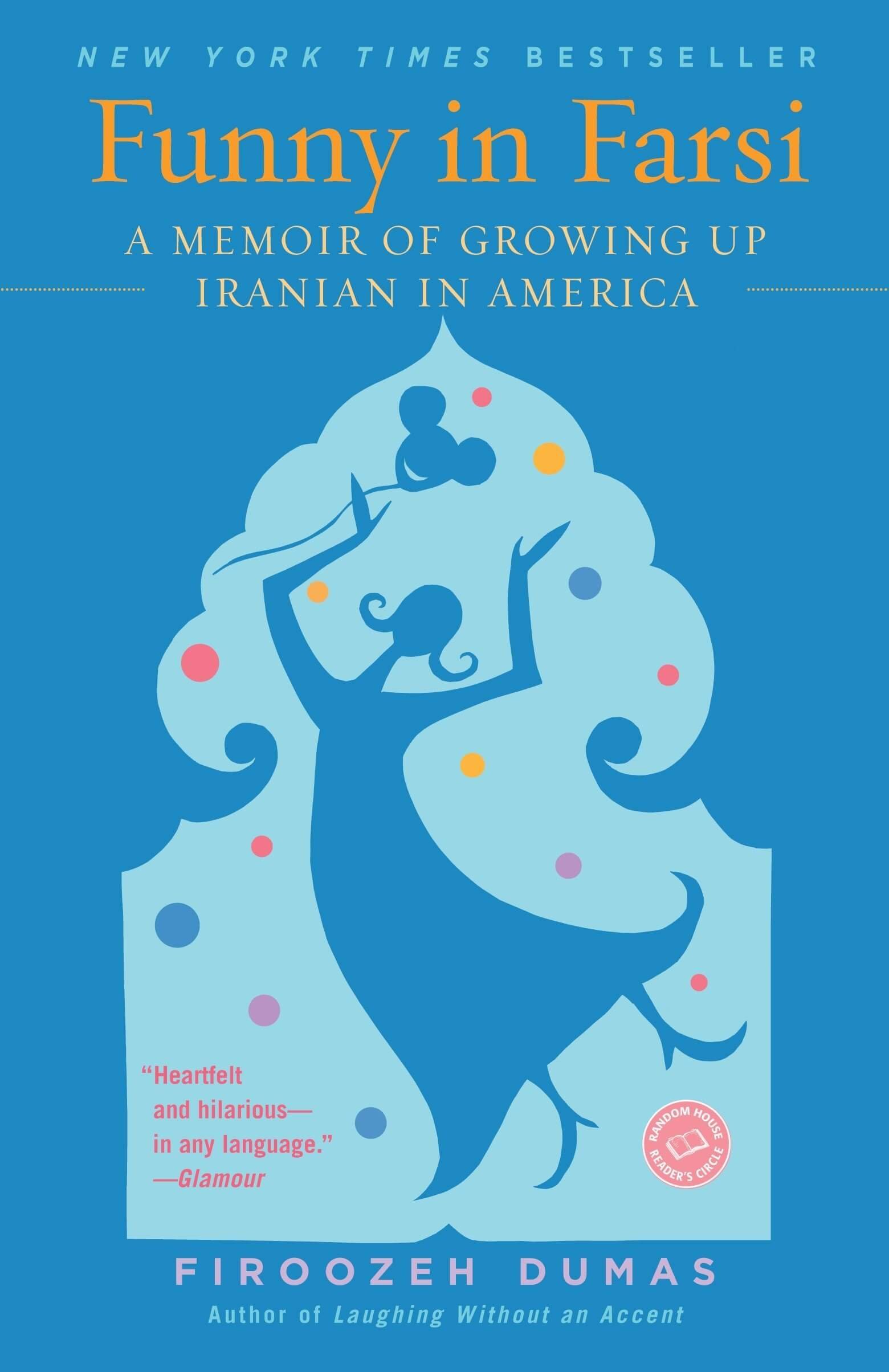 The reader’s guide at the end of Funny in Farsi includes an interview, and the grounding for her ability to connect others shines through clearly: “I have always believed that there are far more good people in this world than bad ones and that most people want to be reminded of our shared humanity rather than our differences.” The simplicity of this view belies its powerful sentiment. People change when they have the opportunity to genuinely engage with others, find commonalities and learn to appreciate differences.

This strikes at the core of the issue. We will never build a diversity program that changes every heart and mind. We will never force those who fear difference to embrace others by prescribing accepted behaviors. Glenn Llopis captures this in “Is Diversity, Equity And Inclusion Bringing Us Together, Or Pushing Us Further Apart?” as he points to a simple approach we too often overlook: “It’s not that culture doesn’t matter. Quite the contrary: we’re all shaped by our backgrounds, our families, our upbringings, the environments we grew up in. It makes us who we are. So let’s lead with who we are.”

Sometimes we need simply need to acknowledge our own biases and lack of experience, let go of our urge to control, and be ourselves. More importantly, we must continually provide opportunities within our organizations and communities to connect with one another—without barriers or artificial structures—as unique individuals with our own experiences, beliefs and values. Listen, reflect, accept…and always maintain a healthy sense of humor. This absolutely will not rectify the collective mistakes of our past nor address every lingering challenge, but it’s a start.

Each day the conference began the same for me, but every breakfast at Junior’s was unique. Sometimes a regular settled on a stool, greeted by name and a “How you doin’?”. The staff would call out to each other across the room, mixing Spanish and English as they watched tennis matches on the widescreen television. Tourists ambled in, adding Mandarin, Japanese and other languages to the clamor. In the world we now live in, diversity is often more easily found than in the past. It increasingly surrounds us, from the towering skyscrapers of New York to the quiet hills of northern Thailand. Differences present a greater challenge. They challenge, needling us with discomfort and unease. But that’s why they are so important to acknowledge and accept.

Our natural tendency is to withdraw, falling back to the familiar. Only by embracing the differences that diversity brings, with openness and humility, do we push ourselves into a state of learning. We don’t always need more laws, programs or initiatives to do this; those already exist and have for many years. Perhaps sometimes the answer is simpler. Whether in our schools, social structures or workplaces, we need to begin purposefully providing more opportunities to explore difference. Crucially, these need to happen naturally. They emerge from sharing our stories and our hopes, from the everyday moments that we experience with one another, tempered with humor and empathy. Perhaps we all simply need to practice compassionate leadership, no matter the scale.

It was my third visit, and the harmonies of The Mamas and the Papas floated effortlessly through the room. Setting the full plate in front of me, the Latina waitress asked, “Can I get you anything else, sweetie?” Another stood by waiting to refill my cup while the white-haired man, a Vietnam veteran, behind the counter threw a towel over his shoulder and set down a jam holder. “Look at this. You got three people to wait on you!”, he joked in his Brooklyn accent. Just a few minutes earlier, he had been exchanging barbs with a black coworker, an immigrant who had thrown an arm around him, bantering about green cards and walls. The old man sighed. “Yeah, we’re gonna build a wall…to keep you in!” His coworker—and friend—walked away, prompting him to throw up his hands. “You see what I have to put up with?!”, he exclaimed. A smile tugged at the corner of his lips as he went back to work.

Read more of my posts